I have sprained my ankle – what should I do next?

A sprained ankle is an injury that occurs when you roll, twist or turn your ankle in an awkward way. This can stretch or tear the tough bands of tissue (ligaments) that help hold your ankle bones together. A large majority of these injuries are sustained during sporting activity; in fact ankle sprains have been shown to be the most common injury in a total of 24 different sports (Fong, 2007). They are particularly common in sports that involve change of direction or jumping, with high incidences reported in Gaelic football and hurling (Watson, 1999). 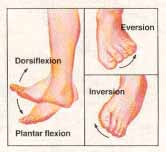 The ankle joint connects the bones of the lower leg to the foot. It is made up of three different points of contact between four bones – the Tibia, Fibula, Talus and Calcaneus (see Image 1). The arrangement of the bones allows the ankle joint to move in four directions, plantarflexion, dorsiflexion, inversion and eversion. 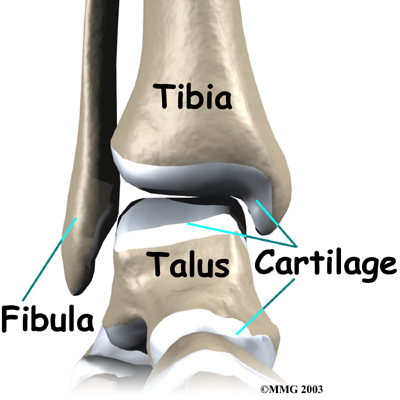 The ankle is supported by several strong ligaments (see Image 2). The Deltoid ligament lies on the medial (inside) aspect of the ankle with three ligaments supporting the lateral aspect

including the Anterior Talofibular ligament (ATFL) which is the most commonly injured ligament in a sprained ankle. The ankle ligaments act as support structures and serve to prevent excessive and damaging movement occurring at the ankle joint.

Ankle ligament sprains are among the most common injuries in GAA players. A 6-month prospective study of injuries in Gaelic footballers was conducted by Wilson et al. in 2006. There were nearly twice as many injuries during matches as during training. The ankle was found to be the most commonly injured site (13.3%) followed by the quadriceps and hamstring muscles (both 12.2%).

As previously mentioned the ATFL is the most commonly injured ligament in a sprained ankle. Up to 73% of ankle sprains involve isolated rupture of the ATFL (Fong et al 2009). Damage occurs to this ligament when the ankle is forcefully inverted (or turned inwards) which is what happens when you roll over onto the outside of your foot (see Image 3). 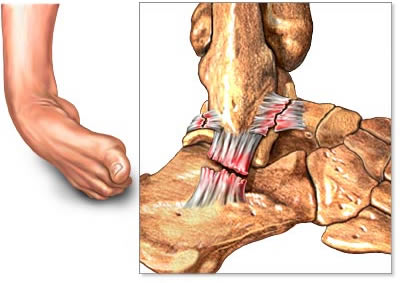 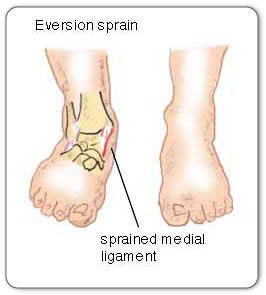 The activities involved in GAA games place significant amounts of pressure and strain on the ankle joint. A lot of research has been carried out in order to identify potential causes of ankle sprains in a range of sports. There are both external and internal factors involved in identifying the risk of an ankle injury.

Extrinsic factors for ankle injury can include poor quality training surfaces, ill fitting footwear or inappropriate training drills/intensity when the player is unprepared. A case could also be made to suggest that too much grip on the sole of football boots may increase the likelihood of rolling over on the ankle by allowing less leeway when trying to change direction at speed.

Willems et al (2005) found that lower overall cardiovascular fitness levels and slower running speed were recorded in men who sustained ankle sprains. Other factors identified included deficits in balance, decreased dorsiflexion range of movement and decreased strength and reaction time in the muscles around the foot and ankle. These factors are particularly important in GAA games given the pressure placed on the ankle joint.

If you suffer an injury to your ankle you should initially follow the RICE protocol. You will need to Rest from any activity which aggravates the pain in your ankle. Ice the affected area as soon as possible after the incident. Apply the ice wrapped in a damp towel and keep it in contact with the ankle for 15-20minutes. Placing a Compression bandage around the ankle may also help to support the joint in the acute stages. Elevating the foot as often as possible will serve to control some of the swelling that can occur after an ankle sprain. Following these steps will help reduce your pain and swelling and speeding up the recovery process.

This type of injury mechanism also has the potential to result in a fracture to one of the bones in the foot or ankle. If you are unable to walk for four steps and have significant swelling or severe pain on either side of the ankle joint you should seek treatment in an emergency department in order to have an X-Ray carried out.
You will need to be assessed by your chartered physiotherapist to determine which structure has been injured, the extent of the damage, the likely recovery time and the best course of management for your injury. At Somerton Physiotherapy Clinic we will perform several tests in order to identify if any of the ankle ligaments have been torn.

Initial treatment is likely to involve very gentle range of movement exercises, soft tissue massage and light stretching in order to prevent excessive stiffening of the joint in the acute stage. As your pain levels and ability to move improve you will begin to work on the strength in the muscles around the ankle. When appropriate your physiotherapist will introduce higher level exercises designed to improve the balance and proprioception around your ankle. This can involve exercises on wobble disks or balance cushions in order to challenge your ankle appropriately before returning to football or hurling. Running, sprinting, agility and change of direction drills also need to be incorporated to prepare you to meet the demands of your sport. 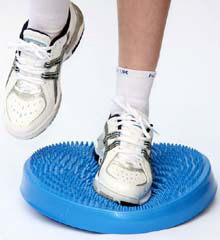 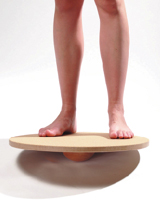 Your Physiotherapist here at Somerton Physio will advise you when it is safe to return to sport once you have cleared all of the return to play criteria. Returning to play without having sufficient levels of leg strength, control, balance and proprioception can put you at significantly higher risk of suffering a recurrence of your ankle injury.

Clanton et al (2012) reported that that up to 80% of people who sustain an ankle sprain will suffer from recurrences of the injury and up to 72% can develop chronic instability. These figures show just how important it is to properly rehabilitate your ankle injury prior to returning to football and hurling games.

You can also check out our Running Performance Lab, located in our clinic in Castleknock GAA Clubhouse, where we provide a platform for recovering athletes to regain their full potential.  We review your running technique from multiple angles in our state of the art facility. We then analyse your run using using world leading movement capturing software (Dartfish) in order to construct a plan tailored to your needs.

We treat runners of all backgrounds, whether you are a beginner, recreational runner or an elite athlete. If you are suffering from running related pain or just want to improve your running times, our detailed assessment and treatment plans and packages will help you to take your training to the next level. Click here for further details.

If you are looking for a Physio for a sprained ankle in Dublin, you can book in to see one of our experienced Physio’s to get a more individualised assessment and treatment approach? You can now book an appointment at our Blanchardstown Physiotherapy Clinic, our Castleknock Physiotherapy Clinic or our Old Bawn Physiotherapy clinic through our website www.somertonphysio.ie, email us on [email protected] or call us on 01 9069566.

About the Author: James Sherry

James Sherry MISCP is an experienced Chartered Physiotherapist with the majority of his practice focusing on the treatment of back and neck pain, sports injuries and adolescent physiotherapy. He has worked extensively with GAA players and athletes at all levels over the past 12 years. Previously James has been a member of the GAA’s Medical, Scientific and Welfare Committee. He currently sits on the GPA’s (Gaelic Players Association) Player Welfare Committee. James played for the Fermanagh Senior Football GAA team for 11 years. While studying Physiotherapy at UCD he captained the college team when they won the Dublin Senior Football Championship in 2006. He also captained his former GAA club Roslea Shamrocks to four Fermanagh senior championship wins between 2010 and 2014. James has a keen interest in all sports. He competed internationally for Northern Ireland and Irish schools in cross country running. He continues to play senior football with Castleknock GAA club in Dublin. James established Somerton Physiotherapy Clinic in 2015.